What is a Fancy Bearded Dragon? A fancy bearded dragon is a beardie that has been bred to have specific characteristics. These could include:

This type of breeding only changes their outward features and they’re still a normal bearded dragon underneath.

How Much Does a Fancy Bearded Dragon Cost?

This is due to the extra care and attention that’s gone into the breeding.

When purchasing a beardie from a breeder, make sure you check out their credentials first. This ensures that you get a healthy bearded dragon from a reputable source.

How Big is a Fancy Bearded Dragon?

Fancy bearded dragons are bred to be larger than a standard bearded dragon. Although they may look the same size while they’re young, ensure you check out the parents.

If the breeder is specifically wanting a larger dragon, it may not be immediately obvious.

You don’t want to have to purchase a giant vivarium a year down the line because your dragon has unexpectedly grown to 3 times the size than you expected.

A normal dragon is around 18 inches from nose to tail. But a giant one can grow to 50% more than this, so just be sure which type you’re buying.

What are the Main Differences?

They’re much more distinctive than normal bearded dragons and probably wouldn’t survive in the wild this way.

When in the wild, bearded dragons rely on their color to blend into the bush and hide from predators. Having a bright red color would make them stick out easily, so fancy bearded dragons are only bred domestically.

A standard bearded dragon will have rough scales and spikes protruding from the corners of their jaw. This is what makes them look dragon-like.

However, a fancy bearded dragon may be specifically bred to have smoother scales. This may make them an easier pet, but again, it wouldn’t be much help in the wild.

What are the Main Similarities?

Whilst there are some differences in appearance, there are still lots of similarities between a fancy bearded dragon and a regular beardie.

The lifespan of both fancy and standard bearded dragons is around 12-14 years, with the right care.

They will still exhibit the same behaviors, eat the same omnivorous diet, and they still require the same habitat.

While fancy bearded dragons do look slightly different, internally they are the same. It’s just their external features that are developed to look more appealing to certain people, depending on what you like in a dragon.

How to Take Care of a Fancy Bearded Dragon

Although they might look very different, breeders don’t generally change anything in their selection process that would cause inner mutations. This is because it can have an effect on their life expectancy or health in general.

A fancy bearded dragon will require a vivarium that’s big enough for it to roam around in.

You’ll also need to provide places to hide away and will also need to ensure you have an optimum lighting setup. They’ll spend the majority of their day basking.

Bearded dragons are omnivores too, so they need a selection of veggies and protein to keep them healthy.

Generally, this comes in the form of insects such as crickets and the occasional hornworm too. You can now even source these online. 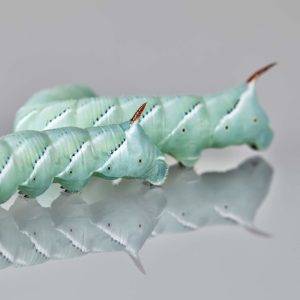 How Do You Breed a Fancy Bearded Dragon?

The breeder will initially take two bearded dragons that show the certain characteristics that they’re looking for, though on a small scale. For example, they might have two dragons that are slightly redder than the others.

Once these have been bred together, they’ll hopefully produce offspring with this same characteristic.

Once these have been bred together, they’ll hopefully produce offspring with this same characteristic. The characteristic will be slightly more prominent in the offspring than in the parents, as they’re getting it from both gene pools.

The breeder will then take the one with the reddest coloring and find another bearded dragon that’s also red and breed again.

The tricky part is that the breeder wouldn’t be able to breed two babies from the same parents, as this would muddy the gene pool and could cause deformities or health problems.

Are There Different Types of Fancy Bearded Dragons?

There are lots of different types of fancy bearded dragons. The variations mainly focus on scale type and color.

Hypomelanistic bearded dragons are very light in color and stand out against the sand. This is because they’ve been bred specifically to have less pigment in their skin, much like an albino.

Although albinos are accidental due to a gene defect.

This type of bearded dragon can even go as far as being slightly translucent. Meaning you can see through their skin slightly in the places where it’s thinnest.

In contrast, you can also find fancy bearded dragons that are much darker than you’d normally see. The colors generally chosen are red and yellow and there are different classified variations of these colors too.

There are lots of different types of fancy bearded dragons, but they all make great pets as long as you care for them in the right way.

Make sure you discuss with the breeder if there are any special requirements for your fancy bearded dragon. Then you can enjoy having a pet with a truly unique appearance.