How Big Do Bearded Dragons Get? Knowing how big bearded dragons get is something that new owners do need to be aware of. It can be quite easy to underestimate how big your new beardie may get.

Knowing this will allow you to select the right size tank and accessories for your little beardie.

What Affects a Bearded Dragon’s Size?

There are many factors that influence how big your bearded dragon is going to get.

The average size of the parents is a good place to start.

Some breeders also purposely breed larger or smaller bearded dragons deliberately, so make sure you check what sort you have.

The second thing to consider is the environment. Bearded dragons won’t tend to outgrow their habitat.

You’ll often see pictures of wild bearded dragons that are much larger than domesticated ones. That’s because they have more room to grow.

Make sure you get the right size terrarium, large enough for an adult to begin with and you won’t have any issues.

Bearded dragons are just like us. The more healthy food you feed to them, the larger they’ll get.

If you don’t feed your dragon often enough, or give them the wrong types of food, they won’t grow as big. The nutrients and proteins in the live food and fruit and vegetables help them to grow big and strong.

Like most species, males are larger than females generally. Females also tend to have a slimmer physique, so, although they might be long, they do usually look smaller.

So How Big Do They Get?

Taking all of this into consideration, a full-grown bearded dragon can be anything between 12-24 inches long.

As a rough guide, to ensure you bearded dragon is growing correctly, it should reach 11-14 inches within the first 6 months.

How Long Does It Take for a Bearded Dragon to be Fully Grown?

Bearded dragons usually reach their full size within the first 12 months. Their rate of growth may vary depending on their diet and lifestyle.

Some dragons will grow steadily throughout this time, whilst others may have growth spurts.

The first 6 months is where you’ll notice the change on a weekly basis. The growth then starts to slow down slightly so it’s not always that noticeable.

Don’t worry if you think they’ve stopped growing suddenly. It might just be that you can’t remember how big they were the week before.

Some dragons do carry on growing right up until the 18-month period, depending on their type. If you have a German Giant, it’s likely that they’ll continue to grow after the age of sexual maturity.

If you notice that your bearded dragon is acting like an adult, they may still have some growing to do, so don’t worry too much if they aren’t the size that you expected.

So, the chances are that they’ll continue to grow after they’ve matured.

Why Isn’t My Bearded Dragon as Big as I Thought?

If you’re concerned that your bearded dragon is reaching the 6-8-month period and isn’t growing as you’d expect, there are a few things that you’ll want to check out.

Make Sure You Provide an Optimal Habitat

As we’ve discussed, a bearded dragon’s habitat is a massive factor on their size. If you notice that you dragon has stopped growing, you’ll need to consider if their habitat is fit for purpose.

Do you need to purchase a larger one?

The habitat also requires a lot of UV light, especially throughout the first 12-month growth period.

This is because your bearded dragon will get a lot of their calcium, vitamin B and vitamin C from the light, just like we do from the sun.

If your dragon gets too cold and doesn’t have enough light exposure, they’ll likely have stunted growth.

Your Beardie Could Have an Illness

If it’s the case that your dragon was growing fine and has suddenly stopped, it may be a sign of illness. Are they eating and drinking less?

Are they sitting in odd places in their terrarium? If you notice odd behavior as well as stunted growth, it might be time to consult an exotic species vet for advice.

Are They Getting the Best Diet?

A common cause of stunted growth is a lack of protein. This generally means that your bearded dragon isn’t getting enough live food.

That’s an easy fix if it just means you adding more.

However, if you’re giving them enough food, but they’re just struggling to catch it, that’s another matter. In these cases, there are food bowls available that are specifically designed to keep the food in.

They have slippery, sloped sides and a lip over the edge. This gives your bearded dragon more chance of getting some food until he learns to be a better hunter. 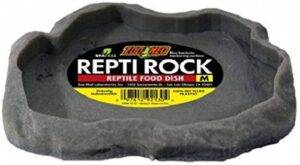 It might also be a good idea to cover any live food with specially formulated calcium power to help them grow strong bones. The Type of Beardie You Have

Make sure you consult your breeder before purchasing so you know exactly what you’re getting.

Some breeders will breed smaller types of bearded dragons through selective breeding as these may be more appealing to certain people.

On the other hand, if you’ve purchased a giant bearded dragon, you might have the opposite problem. Be prepared to get a larger terrarium.

Allowing a Beardie to Brumate Too Early

Brumation is the name for when reptiles go into hibernation. Some people allow their bearded dragon to go into a state of brumation for the colder months as it’s part of their natural behavior.

There’s nothing wrong with this, however, no bearded dragon should go into brumation until they’re fully grown.

This is because brumation requires them to stop eating and therefore, they won’t grow correctly.

You can stop brumation within the first year of your dragon’s life by making sure the heat is at a constant and that there is light throughout the day, so they don’t feel sleepy.

There are lots of factors that can affect your bearded dragon’s size. But don’t get too hung up on it.

As long as they’re healthy and the right approximate size, that’s all that matters.