Do All Bearded Dragons Hibernate? Some bearded dragons do hibernate throughout the cold months to conserve their energy when the food source is naturally reduced in the wild. This process for cold-blooded animals is called ‘brumation’.

Bearded dragons originate from Australia and will generally hibernate for a couple of months in the wild when the weather is coldest there. However, in captivity, depending on where you are in the world, certain factors may differ.

The time of the year may differ and the length of brumation may also change as beardies tend to adapt to the environment around them. You may also find that your bearded dragon doesn’t hibernate at all. This is because the climate that you keep them in, having a UV lamp and heat all year round, means that it doesn’t feel the need to.

Do Bearded Dragons Brumate or Hibernate?

Brumation and hibernation are two very similar processes. They are similar in that the animal will slow down its internal processes to conserve energy during cold winter months. Often food is scarce and warmth is hard to retain. The body’s metabolic rate during hibernation and brumation will slow down so that energy isn’t burned as quickly.

So what is the real difference? Well, when a mammal decides to hibernate it will go into a full sleep whereas, for bearded dragons going through brumation, they do not enter a full deep sleep. Instead, they will be in a state where they are semi-aware of the environment around them, allowing them to wake up momentarily to rehydrate if required.

At the start of the brumation process, you’ll start to notice your bearded dragon’s behavior change. It will slow down its movements, move less, and stick to the shady areas. It’ll also eat and drink less and sleep much more often at obscure times of the day. These things are completely normal, it’s just their way of winding down.

Your bearded dragon will eat less as it wants to flush its stomach of all food before committing to brumate. This is to prevent any food rotting if it’s in their system for a long period of time. The full hibernation period can last from a few weeks to a few months depending on the situation.

You’ll need to make sure their digestive system is completely empty before they begin. Don’t try and force your bearded dragon to eat if you notice their behavior change. This can cause more harm than good in the long run. Just let them do their thing, but if you feel uneasy, there’s no harm in consulting an exotic species vet for their advice and a quick check-up.

Why Don’t all Bearded Dragons Brumate?

The urge to go into brumation may change based on the size and weight of your bearded dragon. A heavier bearded dragon may feel more of a need to brumate as it is easily able to use stored fats to keep its body going whilst it’s asleep. However, if you have a thinner bearded dragon, they might want to continue to eat throughout this period and won’t hibernate.

The instinct to go into a state of brumation is also dependant on the climate and seasons. Australian bearded dragons may hibernate in a more uniform manner as the seasons occur for them in a natural habitat. They know exactly when it’ll be hot enough for them to bask in the sun and get the most food. Equally, they know when the food will be scarcer. This happens, in the same way, each year.

Bearded dragons in captivity, living in different countries won’t experience the same predictable climate and seasons. For example, in the UK, the whole summer might not be hot, so this may change their body clock. It’s also likely that keeping the heat lamp on all year round will give your beardie less reason to go into brumation.

Is This a Problem

It’s not a problem if your beardie doesn’t choose to brumate, as long as they have access to food an optimum light setup, they will still feel completely normal. However, if your beardie is showing signs of brumation, you should avoid preventing this process from happening.

Instead, you should begin to slowly reduce the temperature in the tank to around 70F. The amount of light should be reduced from 12 hours down to 8 hours. This should be done gradually though.

Do not worry if your bearded dragon doesn’t want to brumate. That just means you get to spend more time with them all year round.

What To Do When You Notice Signs of Brumation

You will know when your bearded dragon is starting to think about brumating. They’ll start sleeping more, have a decreased appetite, and will hide in the shade. When this happens you should mimic their natural habitat to make this process easier for them.

To do this you should reduce their food gradually. You’ll also need to start to dim your UV light, or put it on for less time during the day and cover the vivarium with a towel or blanket. This replicates the burrow that they’d normally make in the wild.

Typically, a bearded dragon will dig a burrow in the ground and block up the entrance to protect itself from predators. They then spend the winter months in this cool, dark den until they start to feel the surface become warmer.

There is a cool substrate that allows you to build tunnels for your beardie to hide in. This is the Zoo Med Burrowing Substrate which is entirely natural and once set, will hold and maintain its shape giving your bearded dragon a natural-like habitat to brumate in. Do I Still Need To Feed My Bearded Dragon During Brumation?

During brumation, you won’t need to provide food or heat to your bearded dragon at all. You should still check on them each day to see if they’re awake. It’s completely normal for a bearded dragon to wake up a few times during their hibernation period. If they wake up they’ll still act sleepy and sluggish.

The waking period can vary based on the heat and climate in the room, which their bodies naturally sense whilst asleep. If you have a particularly warm day, you might find that they stir. If this happens it’s a good idea to offer them a bit of water using a water dish, or a shallow water bath. Your beardie may be quite dehydrated and will appreciate some water if this is the case. 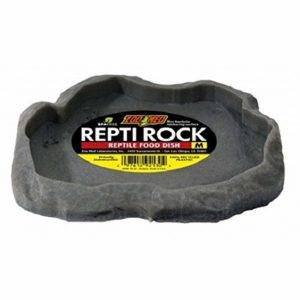 Avoid using a syringe, because if they aren’t fully awake this can cause them to choke. Some bearded dragons will want to drink a little whilst they still appear to be asleep, which is great. You don’t need to be concerned if they don’t want a drink, they obviously just feel that their body is hydrated enough.

How Do I Tell If My Bearded Dragon Becomes Ill Whilst Brumating?

It’s a great idea to weigh your bearded dragon every so often. This is to ensure that it’s not losing too much weight while it’s sleeping. Just be gentle when doing this and you won’t disturb them, they’re deep sleepers.

As reptiles tend not to eat in massive quantities anyway, their bodies should be naturally equipped to go longer periods of time without food. Losing 3-4 grams is an acceptable weight loss for the duration of brumation. If you start to see fast weight loss over a short space of time, you should consult a vet, as this may be down to parasites or illness.

Important Note: It is essential that you do not just use the same kitchen scales that you use for cooking. This will significantly increase the risk of spreading bacteria and disease. Instead, you should have a completely separate set of scales to weigh your beardie. Ideally to minimize disruption to your beardie you should weigh them using a bowl and scales as below. 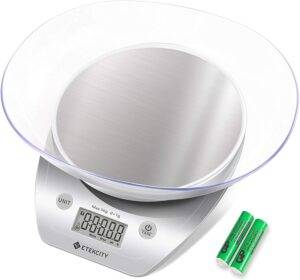 As you can see, there are quite a few early signs from your bearded dragon, that will let you know that they’re planning on brumating. Some of them can appear alarming at first but don’t panic. Just monitor them and let them do their thing and if you become really concerned, make sure you speak to a vet that specializes in reptiles.