Can Bearded Dragons Live Together Many new owners of bearded dragons ask whether they can live together. The simple answer to this question is:

You should avoid keeping beardies together and you must question why you want to keep them together.

Beardies are territorial animals, especially males, and having more than one in a small space can cause them to fight.

Why It Is a Bad Idea

There are many forums and pages advising against keeping bearded dragons together, often known as cohabitation. What many of these sources lack though, is a thorough explanation as to why that is.

Here are a few simple reasons and also some answers to many commonly asked questions.

Reason #1: The Fight for Food

Food will become an issue if you put two bearded dragons in together. You’re always going to have one that’s larger, faster, and stronger than the other.

This could mean that the smaller bearded dragon won’t get enough food, which will cause health issues further down the line.

Reason #2: The Risk of Injury

Having two males and a female will cause them to fight for dominance, especially if one is larger than the other. 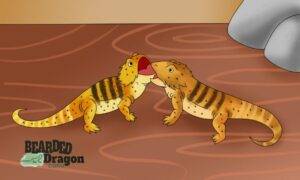 Having two females and one male may also cause the females to fight or be injured in the mating process.

This will avoid complications with the eggs later on.

Do Bearded Dragons Get Lonely?

As bearded dragons are naturally solitary in the wild and only come together to mate, they don’t get lonely.

Actually, they tend to be much healthier and more content when they live alone.

This is because they don’t feel the need to compete for territory.

Your bearded dragon definitely won’t get upset if you don’t get him a friend, so don’t worry.

Can I Keep a Mother and Baby Together?

Keeping a mother and her babies together can cause problems. In the wild, a bearded dragon wouldn’t stay to take care of her young as a mammal would.

Once the eggs are laid and protected, the mother would leave them to their own devices so it’s a good idea for you to remove them completely.

You can take care of them yourself in an incubator to control the temperature. Baby bearded dragons are very small in comparison to the adults. Leaving them in the same space as the mother could cause her to accidentally trample on them and injure them.

It’s also possible that she would see them as competition for the food and may intentionally harm them.

It can not be stressed enough, keeping beardies together in the same tank is asking for trouble. You can encounter many potential issues and problems which are just best avoided.