If you are thinking of getting a bearded dragon or have one, you might be wondering if they are friendly.

After all, pets are supposed to be friends. Although reptiles may not be the cuddliest of animals, the bearded dragon is one of the most friendly of reptiles.

This is why most people like to keep them as pets.

Among other things such as the exotic appearance of the animal, its silent nature, the most attractive aspect of a bearded dragon is its friendliness.

Contrary to their appearance and name, bearded dragons are fairly passive.

Bearded dragons are generally social, friendly, and docile animals. They can be easily tamed and they are known to tolerate human touch better than most reptiles.

However, to answer the question, whether all bearded dragons are friendly? It would be no, not all of the time.

However, just because your dragon isn’t showing friendliness like the rest, that does not mean it is unfriendly.

It may not be as attached to humans as other bearded dragons, but you will find it enjoying other activities.

Just because bearded dragons are friendly does not mean they are like your typical pets.

In fact, try imagining as unique as possible and that’s how your dragon will turn out to be. It is important for you to understand the basic behaviour of your pet.

In order to translate your bearded dragon’s actions, you would need to comprehend its behaviour.

Typically, a bearded dragon is a calm, passive, and slow animal. They are often silent and rarely make a noise.

Actually, bearded dragons are quite meek and make a great pet for everyone, including kids.

However, you may need to remind your kids to be slow and gentle.

Also keep an eye since kids like putting whatever they get their hands on, in their mouth.

Your dragon may run up and down the glass to catch your attention. Sometimes, it may just walk up to you.

Hanging Out With Bearded Dragons

The next question should be about defining your limits. Do bearded dragons like to be picked up? Can they be handled in hands?

The answer is yes.

They also take a different amount of time to adjust, so allow your dragon to take its time.

That being said, most bearded dragons do like to be picked up. They can perch on your shoulder or sit in your lap. Interestingly, they also pay considerable attention to the TV, you can even get a beardie sofa! 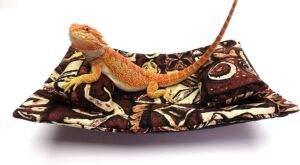 You can also let your dragon loose and allow them to run around.

If you take them to the yard, do not leave them unattended. Other animals may prey on them.

A good way to keep them safe is to take them out on a leash and harness. You can get many different styles, a popular one for photo opportunities is a leash with wings! Can You Stroke or Cuddle a Bearded Dragon?

Pet owners would admit that their favourite thing to do is to cuddle with their best buddies. So can you stroke or cuddle a bearded dragon?

Yes, you can. Most bearded dragons like the human touch. They allow it based on their temperament. So go with the flow of your dragon.

Some bearded dragons love to be cuddled. They may even rush towards you.

Remember to be gentle. You may find them cute and get an urge to squeeze them.

However, do not squeeze your bearded dragon, nor hold them too tight. They are solitary animals and mostly like to be handled at their own pace.

How to Handle a Bearded Dragon

Being docile, bearded dragons usually enjoy human the company of humans as opposed to other reptiles. However, it is important that you give your dragon its time to adapt to your touch.

Do not rush it. Begin with seconds and then gradually increase the time of your touch.

The key to developing any healthy relationship is to allow the other to establish trust.

The same goes for your bearded dragon. Be patient enough to allow your dragon to take its time.

Note that, if you pick up your bearded dragon, do so from under it or the side. Do not try to pick it up from above.

It may perceive you as a predator and your opportunity to gain its trust may run out.

The owners of bearded dragons may vouch for the friendliness of their pet; however, they are not friendly to all humans.

You will find them being exceptionally cuddly with their owners. They may climb into their laps or sit on their arms and shoulders.

On the other hand, if they are exposed to a stranger, they are likely to fly. This happens because they take time to adjust.

Once, the stranger gains their interest, they are likely to submit.

Are Bearded Dragons Good With Other Animals?

Yes, they are friendly little tender animals. However, they are quite territorial when it comes to other animals.

Bearded dragons often do not react well to other bearded dragons. They will get aggressive in order to exert dominance.

Therefore, unless it’s breeding season, try not to put two bearded dragons in the same enclosure. Female bearded dragons who do not submit to male dragons may even be attacked. As for the other animals, do not leave your bearded dragon in front of your other pets if you have any.

In their curiosity or otherwise, dogs or cats may attack and even harm or worse, kill your bearded dragon.

What are the Signs of Aggression in a Bearded Dragon?

There are certain clues to figure out if your bearded dragon is being aggressive or not.

Firstly, both male and female bearded dragons have a ‘signature’ beard. It’s vital for communication.

All of the following are signs that your bearded dragon may be feeling threatened:

Another indicator is the color of the underside of their neck. It may turn black. Dragons do that to assert dominance by appearing bigger.

In contrast, if a beardie bobs its head slowly or appears to be waving their arm, they are being submissive and may feel threatened.

Besides marking territory and asserting dominance in the other members of its species, they may also be hostile to humans.

There are several reasons behind the unfriendly attitude of your bearded dragon. Read the language.

Your bearded dragon may be sick. Sickness is one of the reasons for aggressive behaviour in both humans and animals alike. Notice the signs and get it treated ASAP.

We all get hangry at times right? Well, beardies are no different, in fact they suffer from emotional hunger tantrums just like a little toddler.

A hungry stomach attacks mood like nothing else. Making sure you feed your dragon at a regular time can help to set routines, this will help prevent you from forgetting meals.

Unfamiliar company may also put a bearded dragon on guard. If your beardie is new to your home, wait till you are properly introduced and accepted before attempting to handle them.

To put it in simpler terms, most bearded dragons are friendly and docile. They can be easily tamed; you just need to know the tricks.

It is important that you respect your dragon’s space and give them time to adjust.